Skip to content
Become a member and get exclusive access to articles, live sessions and more!
Start Your Free Trial
Home > Features > Chronology: Jim Knapp, the Best Big-Band Leader You Never Heard Of

There are two kinds of jazz listeners. Those who recognize Jim Knapp as a profound large-ensemble composer and arranger of uncommon imagination, depth, and expression—and those who have yet to hear his music.

Knapp, who died November 13 at age 82, was a revered bandleader, composer, arranger, trumpeter, and teacher in the Pacific Northwest. He taught for decades at Cornish College of the Arts in Seattle and worked in myriad idioms: big bands, free improvisation, chamber orchestra, collaborations with dancers. But he operated below the radar of the national jazz media and outside professional networks in New York and Los Angeles. Even musicians well-versed in big-band literature are unlikely to have encountered his music. Still, anyone who spends time with it winds up proselytizing for it.

The beauty and integrity of Knapp’s work make apostles out of us all.

“I wish more people knew about Jim,” says celebrated composer and arranger Jim McNeely, who knew Knapp at the University of Illinois in the late 1960s. “He drew such a wide range of colors out of a band, and his music has such a warm palette, from pastels to deeply intense colors. His music also has wonderful melodic material. Certain people might be strong in harmony and rhythm, and Jim was too, but his melodies could draw in listeners. Not everyone can do that.”

Knapp’s primary creative vehicle during the last 25 years was the 13-piece Jim Knapp Orchestra, documented on four CDs. The latest, It’s Not Business, It’s Personal (Origin), was released only six days after his death. It’s sensational, capturing his aesthetic and the subtle blend and balance he elicited from a talented band of true believers. The lean instrumentation—four reeds, three trumpets/flugelhorns, French horn plus two trombones, piano, bass, and drums—gave Knapp enough density but also the flexibility of a chamber ensemble.

On “The Presence of Absence,” a pensive ballad streaked with melancholia, alto saxophonist Mark Taylor carries a sighing melody over a mutable landscape. Bell tones, pyramid entrances, and woodwind timbres create a play of light and shadow as mesmerizing as the chiaroscuro in a Vermeer painting. Almost imperceptibly, a solo flute assumes the melody amid exquisite detailing and development. Listen for Tom Varner’s expressive French horn rising out of the ensemble, Taylor’s zephyr-like tone and sensitive improvising within the character of the piece, and the revolving five-, four-, and three-beat meters that contribute to an enigmatic form. Are the “disappearing” beats a manifestation of the absence in the title?

Knapp’s ear for shape, pacing, tension and release gives the events in his pieces a sense of inevitability and spontaneity. “Forward Motion” is cast as a basic 32-bar ABAC swinger, but imaginative interludes, filled with cross-section scoring and harmonic tension, keep you on the edge of your seat.

Knapp embodies the orchestral tradition of big-band writing inherited from Duke Ellington and Gil Evans—composer-arrangers who broke down the hegemony of antiphonal brass and reed sections and block voicings in favor of instrumental combinations across sections, independent melodic lines moving horizontally, and multihued tonal colors and textures. He once said that the Evans/Miles Davis collaborations Birth of the Cool and Miles Ahead changed his life.

Even musicians well-versed in big-band literature are unlikely to have encountered his music. Still, anyone who spends time with it winds up proselytizing for it.

Born in Chicago in 1939, Knapp studied classical composition at the University of Illinois in the ’60s. His key mentor was John Garvey (1921-2006), who led the school’s jazz band. A singular polyglot, Garvey had played viola in the Walden String Quartet, which premiered and recorded Elliott Carter’s First String Quartet, but he’d also toured with a swing band, the Jan Savitt Orchestra.

Garvey was a miracle conductor, whether leading an experimental theater piece by Harry Partch or a Count Basie chart. He demanded a nuanced ensemble blend and dynamics more typical of a symphony than a jazz band. Like Ellington, Garvey led a vernacular orchestra. In the ’60s and ’70s, many considered it the finest collegiate jazz band in America. (Full disclosure: I played alto saxophone in Garvey’s band in 1983-85.)

Knapp absorbed Garvey’s high standards, pure musicianship, and orchestral conception. Together they reconceived the ensemble, splitting the brass into the more brilliant cylindrical instruments (trumpets, trombones) to contrast with mellower conical brass (flugelhorns, French horn, euphonium, tuba). Some of Knapp’s most extraordinary writing dates to this period, including arrangements of “I’m Glad There Is You” and “Darn That Dream” and such originals as “Festival Piece,” “19 Before Soc’s Last Cup,” “Other Summers,” and “Before.”

His ravishing deconstruction of Jimmy Dorsey’s “I’m Glad There Is You” takes your breath away. Knapp spreads the melody across the full ensemble, his freely conceived phrasing and prismatic orchestration surging with emotion. One startling example: Baritone sax leads from the basement for four bars in unison with guitar, introducing a passionate new melody against a paraphrase of the tune carried in harmony by two unison trumpets and a third trumpet in unison with tenor sax. The arrangement climaxes with crisscrossing lines and masterful voice leading creating intense dissonance that resolves in a post-coital release.

Regrettably, the only commercial recording of the chart—on a 1984 LP, May Day (Sea Breeze), by the Jazz Members Big Band of Chicago—is out of print and has never been issued on CD. “Other Summers” also appears on May Day. The same band, rechristened as the Chicago Jazz Orchestra, recorded “19 Before Soc’s Last Cup” in 1992 on Diggin’ In (Sea Breeze). A half-dozen Knapp arrangements appear on scarce LPs by the U of I band.

The good news is that the Jim Knapp Orchestra continues in Seattle under the leadership of trumpeter Jay Thomas. Eight of Knapp’s arrangements are available through Common Tone Press, but the executor of his estate, saxophonist Steve Griggs, is exploring the possibility of publishing more. This is critical. Knapp was a genius. Hyperbole? No. 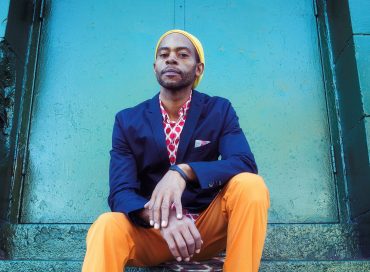 From Straight Life to Jazz and Justice, creative-music literature is rife with horror stories about artists— especially Black ones—getting ripped off. As pianist/composer/educator Jason Moran … END_OF_DOCUMENT_TOKEN_TO_BE_REPLACED

It could be argued that the most underrecognized person in jazz recording and performance is not the producer, the live sound engineer, or the recording … END_OF_DOCUMENT_TOKEN_TO_BE_REPLACED

Great individualists in jazz often constitute a School of One—musicians with such personal and idiosyncratic identities that they hover in a liminal state, anchored in … END_OF_DOCUMENT_TOKEN_TO_BE_REPLACED

This month’s musings were prompted by the arrival of a new book, Phil Freeman’s Ugly Beauty: Jazz in the 21st Century, and word of two … END_OF_DOCUMENT_TOKEN_TO_BE_REPLACED