Skip to content
Become a member and get exclusive access to articles, live sessions and more!
Start Your Free Trial
Home > Features > The True, Boundary-Pushing Story of Gene Howard and Love Is a Drag

In 1960, a Beverly Hills vinyl emporium known as Record Center, located at the corner of Wilshire and La Cienega, kept running out of an album that moral arbiters of the day would have judged obscene. Many of the buyers came from the restaurant diagonally across the street, Dolores Drive-In, which employed a mostly gay team of carhops.

They and their friends headed to the store’s “Adult” bin, which held albums by the likes of the garish drag queen Rae Bourbon and Belle Barth, the whiskey-voiced, potty-mouthed doyenne of lewd nightclub humor. Filed there was an LP whose jacket bore a moody photo of a young man in profile, exhaling a plume of cigarette smoke; behind him was a blond, blurred-out figure of indeterminate gender. Love Is a Drag, read the title. (In those shadowy years, “drag” was a keyword for gay.) No artist was listed. Instead, the cover warned: FOR ADULT LISTENERS ONLY—SULTRY STYLINGS BY A MOST UNUSUAL VOICE.

The disc boasted a crooner with a burnished baritone in the Dick Haymes tradition. Backed by a jazz quartet, he sang “Lover Man,” “Mad About the Boy,” “He’s My Guy,” and other standards meant for women, and delivered them straightforwardly, without a hint of camp. The liner notes observed that, until this brave singer came along, male vocalists had shunned those tunes. “Why? Were they not written by men? And haven’t they been played by the best men musicians of our time? Think what would happen if orchestrations of these great songs could be performed only by girl musicians!”

Richard Lamparski, who profiled hundreds of bygone celebrities in his Whatever Became of … ? book series, recalls how much that album had startled him. “It was one of a kind,” he says. “At that time, almost anything that mentioned homosexuality was so rare.” Decades later, Love Is a Drag jarred the comic essayist David Sedaris when he heard it at a dinner party: “Even now the album is shocking. When a woman sings, ‘He isn’t true/He beats me, too/What can I do?’ you don’t really hear how, well, pathetic it is. It’s not fair that when a guy sings, ‘I’m wild again, beguiled again, a simpering, whimpering child again,’ you think, Ease up, buddy, while you accept those lines from a woman.”

Love Is a Drag’s fans ranged from Frank Sinatra to Liberace, yet it stayed almost unknown for decades. In recent years, however, it has had a small renaissance thanks to JD Doyle, creator of the encyclopedic website Queer Music Heritage. The album’s producer, Murray Garrett, reached out to Doyle to share its untold story. Thereafter Love Is a Drag resurfaced on Sundazed Records, an indie reissue label. Garrett had revealed the mystery singer to be Gene Howard, an obscure 1940s band vocalist who, in the toughest assignment of his life, delivered beyond anyone’s expectations. The musicians include Al Viola, Frank Sinatra’s longtime guitarist. Everyone connected with the project was straight. How the record ever happened still constitutes one of the unlikeliest tales in jazz.

Groundbreaking as it was, Love Is a Drag isn’t the first recording of a man proclaiming love to a man. Many were made in Weimar-era Germany, where renegade art and sexuality reigned. In what now sound like bold gay statements, male band vocalists waxed such ditties as “Farewell, My Little Guard Officer” and “My Darling Ought to Be a Trumpeter.” But according to German singer Max Raabe, whose world-famous Palast Orchester plunges audiences into the music halls of Weimar Berlin, those 78s are not what they seem. “On a typical day at the studio,” he says, “a number of recordings would be made—the hits of the day, whatever sold. I don’t really think that the producers or musical directors thought much about the content of the songs. The singers were merely hired; the real stars were the orchestras and conductors.”

The same thing occurred in the States. Dance bands were boys’ clubs, and until the mid-1930s nearly all their vocalists were male—but that didn’t stop publishers from insisting that songs penned for women be sung as-is. In 1928, Red McKenzie, a popular boy singer, recorded “Can’t Help Lovin’ Dat Man” with the orchestra of saxophone star Bud Freeman. The Rhythm Boys, Paul Whiteman’s vocal trio and the launching pad of Bing Crosby, sang “There Ain’t No Sweet Man That’s Worth the Salt of My Tears” on a 1929 disc. Smith Ballew, a ubiquitous and twice-married band singer who became the Valentino of movie cowboys, recorded “What Wouldn’t I Do for That Man?” and “He’s My Secret Passion.” The strangeness of this flew over most listeners’ heads; to them, a love song between men was inconceivable, although one wonders what gay listeners thought.

In jazz, of course, anything perceived as gay was fiercely unwelcome. Dave Tough, the fiery 98-pound drummer for Tommy Dorsey, Benny Goodman, and Woody Herman, laid down the law. Tough wrote a column for Metronome magazine, and in a 1937 essay, “Down with the Sissies,” he declared his plan to “instigate a movement against homo-sexual [sic] music”—espoused, he felt, by novelty dance bands “which play cute, sterile music…. Cute music is feminine music and its swing the big-hipped, swishy swing of a fag.”

Given his vehemence, it may not be surprising that his own sexuality was under speculation. In 1946, three years before the alcoholic drummer’s death at 41, clarinet star Mezz Mezzrow remarked in his memoir, Really the Blues, that Tough’s “careful way of talking was too precise and effeminate.” By the ’50s, jazz critics were mocking Little Jimmy Scott for his high, neutered wail and denouncing Chet Baker’s singing as “fey” and “effete.”

Gay jazz fans found a warm embrace in Harlem, where anything went. The proof is on AC/DC Blues: Gay Jazz Reissues, an LP produced in 1977 by Chris Albertson, the jazz historian and Bessie Smith biographer. On it, a host of 1920s and ’30s blues artists, including Ma Rainey, sing with utter frankness about gayness and bisexuality. But none of those records comes close to offering a genuine declaration of gay love; the songs, such as “Sissy Man Blues,” are mostly third-person accounts of “fairies” and “bulldaggers” and their “freakish” ways. Far more autobiographical was the “Brown Bomber of Gayety”: singer/pianist Gladys Bentley, a tuxedo-clad, 400-pound fixture of ’30s Harlem nightlife. Bentley flirted from the stage with female customers and rewrote standards to make them lewdly gay; “Alice Blue Gown,” a sentimental ditty inspired by the wardrobe of President Roosevelt’s daughter, became an exposé of anal sex. But on records Bentley cleaned up her act, singing from woman to man.

Even in another gay-friendly milieu, the cabaret world, a love song was a heterosexual thing. Male singer/pianists were a mainstay of the field; most of them were gay but sang to women, changing “he” and “him” to “she” and “her” when needed. “We all did that,” says Ronny Whyte, who began performing in New York clubs in 1961. “There was never a thought of doing it any other way.” On the surface, he and his peers played the role of debonair, lady-killing men about town; inside they were stuck in a lie. “I have to admit I didn’t get caught up in the sexual part of the love songs—I’m not sure that many of us did,” says another veteran singer/pianist, Charles Cochran, whom Fred Astaire signed to Äva, a label he cofounded, in 1963. All over pop and jazz, gay and lesbian singers took care to watch their pronouns.

“[Gene Howard] was the quietest person I’ve ever known in my life. I wondered, is he mute? He had a face that you would be hard-pressed to remember a year later.” –Charles Cochran

How surprising that the man to bust through that wall was the mild-mannered husband and father Gene Howard. Cochran met him a few times at parties thrown by the jazz DJ Mort Fega. To Cochran, Howard seemed like “the invisible man” as he stood “on the sidelines” with his wife Phyllis. “He was the quietest person I’ve ever known in my life. I wondered, is he mute? He had a face that you would be hard-pressed to remember a year later.”

Howard—born Gene Howard Johnston in Atlanta, Georgia on July 14, 1920—was a high-school tennis champ turned big-band copyist and arranger. Entranced by Frank Sinatra, he tried his hand at singing. In 1941 he was hired by a radio station in Nashville; that led to a string of stints with bands, notably Gene Krupa’s and Stan Kenton’s. An efficient but generic baritone, Howard lucked into one Top 10 hit with Kenton, “How Many Hearts Have You Broken?” But it didn’t make him a star, and in 1951 he told the Fort Worth Star-Telegram that Kenton’s blaring brass had done him in. “I had to sing louder than I’d ever sung in my life in order to be heard over the band,” he explained. “After four years I found that what voice I’d had was gone.”

He opened a publicity firm that represented Kenton, Nat King Cole, Les Paul, and Les Brown. Then he recreated himself again by partnering with Murray Garrett, Bob Hope’s personal photographer, to create a photo studio, Garrett/Howard Inc., that specialized in album covers. Many were for Liberty, whose stars included Julie London. In 1958, the label’s vice president, Jack Ames, left to launch his own company, Edison International.

As Garrett told JD Doyle, Ames asked him if he had any offbeat suggestions for albums. He thought of one. Garrett recalled having gone to a Greenwich Village nightclub, where he heard a male singer earnestly performing standards written about men. Sensing a growing and untapped gay market, Garrett proposed a whole LP in that style. He insisted it be done with sincerity; he didn’t want the album to offend his gay friends.

Ames liked the idea. But what singer would take the job? It was agreed that whoever signed on would have to go unnamed. Ames thought of Gene Howard. He hadn’t sung in years and his voice wasn’t recognizable, which would ensure secrecy. Understandably, Howard hesitated; he had two daughters. Over lunch, he and Phyllis talked it through with Garrett. Promised that the album would be made with class—devoid of stereotypical gay speech mannerisms—Howard said yes. 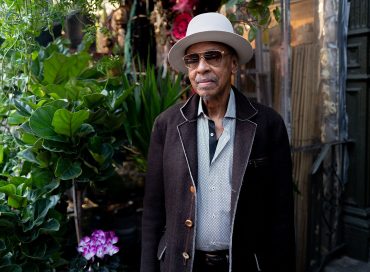 “I think that the greatest thing to have happened has been George Floyd.” What? As an artist, Henry Threadgill has never shied away from provocation. … END_OF_DOCUMENT_TOKEN_TO_BE_REPLACED 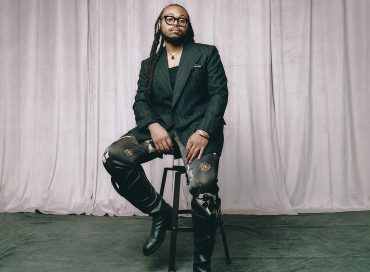 On an unseasonably warm evening in December, just at the opening break of Omicron and yet another shift in everyone’s lives, alto saxophonist/composer Immanuel Wilkins … END_OF_DOCUMENT_TOKEN_TO_BE_REPLACED

Today there are more important jazz musicians who come from outside the United States than ever before. Some stay home and strengthen their local scenes. … END_OF_DOCUMENT_TOKEN_TO_BE_REPLACED